View source
watch 01:36
We're Getting Mutants in the MCU - The Loop
Do you like this video?
Play Sound

Kim Chin, is Kam's twin sister and is one of the main characters in the series Class of 3000.

Like her twin brother, Kim is Asian. She usually wears a multicolored cheongsam and purple shoes. She also wears a backpack.

Kim is obsessed with fashion and always seems to find the right fashion. For example, in "The Cure" she tries to find a replacement model for the school fashion show when Sunny caught a cold. Also in "Tamika and the Beast", Sunny made her a detective, and she said that the hat she was wearing would go with glass, because she had a magnifying glass. She is a free spirit girl who can't stand the goody attitude of her brother. She is friends with everybody in the classroom and she is a nice girl. She is energetic and sleeps with a stuffed one eyed rabbit, due to her fear of the dark. She loves to torment her more old-fashioned sibling.

Generally, though, she is extremely creative, but sometimes Kim's energy can lead to the point of mischief. Also she loves to follow fashion trends. She appears to be more imaginative than Kam. She is creative and smart. Also, she is a freak about the right fashion. In one episode she got caught two times for reading a fashion magazine in class. Also, in the episode "Am I Blue?", at the part where they were not blue anymore she explained she felt like a freakish non-blue freak. She seems to read fashion magazines in her spare time. Kim is a cool girl. She calls Kam a "Melvin", "Nerd Face", and "Cheese Munch". She and Kam are the youngest students in the first year Westley music class.

Kim mostly plays percussion instruments like the cymbals, the xylophone, the marimba, the maracas and the steel drums. She can even play the triangle in the pilot episode "Home" and the piano with her brother, Kam in "Westley Side Story". Kim also plays the turntables as shown in a few songs like "Throwdown" 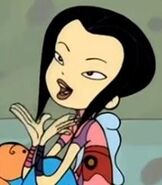