Madison Spaghettini Papadopoulos is a character from Class of 3000.

Madison is loud, happy, silly, hilarious, funny, perky, girly and extremely optimistic as is evidenced from her perpetually vacant smile, and has a bit of a Southern accent like Eddie; however, her hippie-child appearance belies the perceptive mind behind it. She is always happy or thrilled no matter what happens, even if she gets hurt, though she does cry when the kids are put down after learning their lesson in "Am I Blue?" (Some fans believe she has a secret crush on Lil D.) Madison is sometimes crazy, makes havoc and disaster, and is often the focus of Tamika's bullying (in the episode "Home", for example, Tamika shoved a tuba onto her head) Madison has a huge imagination and usually can't concentrate on what's really supposed to be done. She enjoys the company of many animals and baby creatures. In the pilot episode she mentions that she has a grandmother who is of Colombian descent. However, her last name suggests she is of Greek-Italian descent. Her instrument is the high-pitched violin and/or viola, but in the game Funk Box, she also plays a cello. She is 12 years old.

Madison has blonde hair. She wears a white headband, a necklace, a, bracelet, a purple top, blue jeans and light blue flats.

Madison with Lil'D in the pilot episode of Class of 3000 "Home". 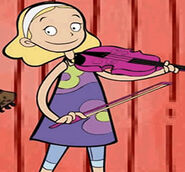